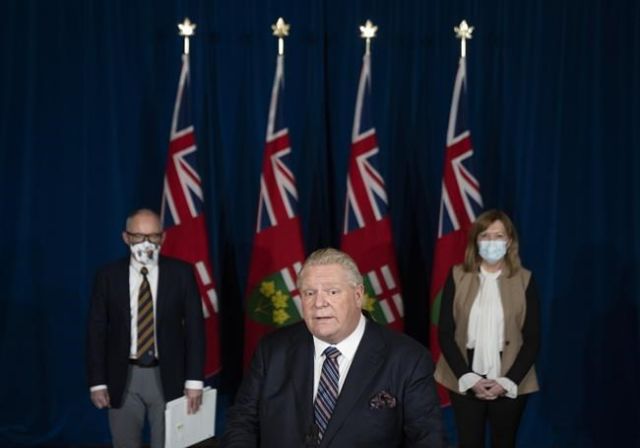 Ontario Premier Doug Ford holds a press conference at Queen’s Park regarding the easing of restrictions during the COVID-19 pandemic in Toronto on Thursday, January 20, 2022.

A look at the latest COVID-19 news in Canada:

— Ontario will soon begin easing COVID-19 restrictions, starting by boosting the size of social gathering and reopening businesses such as restaurants, gyms and cinemas with capacity limits, with an eye to lifting all constraints by mid-March. Premier Doug Ford says he’s announcing a phased reopening plan because public health indicators are starting to show signs of improvement. “We can be confident that the worst is behind us,” he said. “While we can be confident in how far we’ve come, I want to be crystal clear: we’re not out of the woods yet. The coming weeks will continue to pose real challenges, especially to our hospitals.”

— Ontario’s plans to ease COVID-19 restrictions won’t have any immediate impact on fan capacity for hockey and basketball teams operating in the province. The Ontario government has announced that some indoor venues, including movie theatres and gyms, will be able to operate at 50 per cent capacity starting Jan. 31. However, large sports arenas and concert venues will be only allowed 500 people or half capacity, whichever is lower, until Feb. 21. Ontario Premier Doug Ford said capacity will be increased to 50 per cent at that time, with limits being completely lifted March 14.

— High schoolers across Ontario are lobbying their school boards and the province for a “freeze” on grades for the remainder of this Omicron-interrupted semester after some boards said final marks wouldn’t fall further than where they were at the end of last year. The students behind various petitions — which have together garnered more than 15,000 signatures supporting the call for a grade freeze— have formed a sort of unofficial network, sharing information about advocating for what they say would be a more equitable system that accounts for the complexities of the COVID-era classroom.

— The head of a public health unit in southern Ontario will go ahead with stronger COVID-19 measures in local schools, despite censure from the province’s top doctor over breaking from the provincial approach. Ontario’s chief medical officer of health, Dr. Kieran Moore, said he was concerned with Dr. Mustafa Hirji’s plans for schools in the Niagara Region – which involve stricter rules around virus-related dismissals, masks and air filtration – because he said they happened without provincial consultation and could lead to greater rates of student absenteeism. But Hirji said his health unit would go ahead with the measures, which he said were built on “the solid foundation set by the province.”

— Unlike Ontario, Quebec cannot begin loosening COVID-19 restrictions because the situation in the province’s hospitals remains too fragile, Premier François Legault says. “The situation will continue to be difficult for the next few weeks. I understand that we are all tired, but lives are at stake,” Legault says. “We are currently at the limit in our hospitals.” Quebec’s Health Department reported the first drop in COVID-19 patients in the province since Dec. 16. It said that 3,411 people were in hospital with the disease — 14 fewer than the day before — after 352 patients were admitted and 366 were discharged. It said 285 people were in intensive care, unchanged from the day before.

— The top doctor for Indigenous Services Canada says he’s cautiously optimistic the Omicron-driven wave of the pandemic may be flattening across First Nations. Dr. Tom Wong, the department’s chief public health officer, says for this to happen nationally, communities need to maintain their health measures. As of last week, the department reported nearly 85 per cent of people 12 and older living on First Nations have received two doses of vaccine to protect against COVID-19. Wong says there are communities in every region with lower-than-anticipated vaccine uptake, and so far only 20 per cent of adults on reserve have been immunized with a third booster dose. The department says there are currently roughly 5,000 active cases on First Nations.

— Premier Jason Kenney says there are early signs Alberta has “reached and surpassed” peak COVID-19 cases in the fifth wave as provincial hospitalizations surge to numbers never seen before. But Kenney warned that while cases are likely to decline, hospitalizations will continue to increase and put more pressure on an already overwhelmed health system. “If the (Omicron) variant performs in Alberta like it has in jurisdictions all around the world, we can reasonably expect that we may now be beginning on the downslope of transmission,” he said. Kenney said the “encouraging news” comes from wastewater modelling that shows many communities in the province with less transmission, in addition to declining test positivity rates.

— Schools in British Columbia will soon get rapid antigen tests as a way to reduce the transmission of COVID-19 among staff, including teachers and administrators. The Education Ministry says 200,000 test kits are being shipped to elementary and high schools in an effort to keep them open. It says the number of teaching and non-teaching staff will determine how many kits go to each school district as well as independent and First Nation schools. The ministry says it’s working with experts and school districts to improve ventilation systems and additional funding for improvements will soon be made available.

— The Vancouver Canucks could be without two of their brightest stars Friday as COVID-19 continues to ripple through the locker room. Goalie Thatcher Demko and forward J.T. Miller both tested positive for the virus via rapid tests and were held out of practice as the team awaits the results of further testing. Sixteen Vancouver players have been placed in the NHL’s COVID-19 protocol since Dec. 14.

— Nunavut’s health minister says he’s concerned too many residents are not fully vaccinated against COVID-19. John Main says he wants people to encourage their friends and family members to get a shot. Chief public health officer Dr. Michael Patterson says a person who died from COVID-19 earlier this week was over 70 years old and was not fully vaccinated. Government figures show 71 per cent of those five and older have had two doses of vaccine.

— Newfoundland and Labrador students in kindergarten to Grade 12 will be heading back to class Tuesday morning, though the province’s teachers association says it cannot stand by the decision. Dr. Janice Fitzgerald, the province’s chief medical officer of health, said the decision to restart in-class learning wasn’t made lightly. “We cannot let fear guide our decisions,” Fitzgerald said. “One of the most important lessons that emerged from this pandemic is how important school is for children. Not just for their academic well-being, but also for their physical and emotional well-being.” But the Newfoundland and Labrador Teachers’ Association isn’t on board. “The NLTA cannot support a return to in-person learning on Jan. 25,” president Trent Langdon said. “It is simply too soon given the current COVID-19 situation in the province.”

— Health officials in Prince Edward Island are reporting 249 new cases of COVID-19 along with 292 more recoveries. There are 2,471 active reported cases in the province, down 43 from Wednesday. Officials say 10 people are hospitalized with the disease, including two people in intensive care.

Canada is a rogue super-emitter