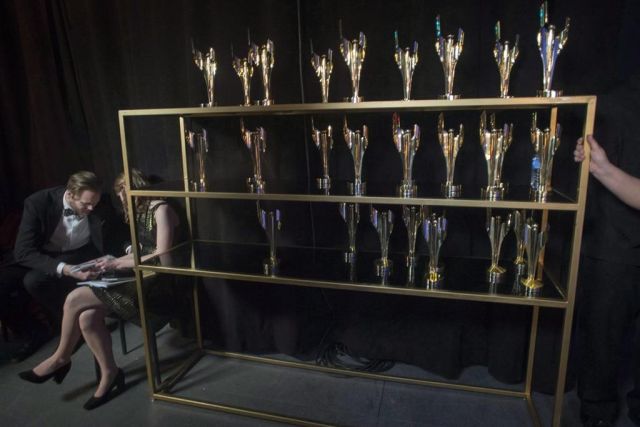 Canada’s top film and television awards are going gender neutral in a bid to better represent the country’s diverse creative community, including gender non-conforming performers who may not identify as either male or female.

The Academy of Canadian Cinema & Television announced a plan Thursday to ditch separate awards for best actor and actress in the 2023 edition of the Canadian Screen Awards, but the shift will result in fewer performance trophies and fewer nominations overall.

Several genre-based TV categories have similarly been redrawn, with the contests for best lead comedy actor or actress now simply “best lead performer” in a comedy.

The interim head of the Academy of Canadian Cinema & Television, which runs the annual star-studded bash, said organizers are trying to better support potential nominees who are non-binary and/or do not identify as either or exclusively one gender.

“We have a mandate of being inclusive and for many years there were large portions of the industry, or creators I should say, that weren’t really invited to be part of the industry in different ways, and sometimes in subtle ways,” said Louis Calabro, acknowledging that the academy has faced recent complaints over representation.

“We’ve done a lot of great work to include different creators from under-represented communities but this is one of those spaces where we may not have been doing that work.”

The move follows a broader industry shift away from gender-specific awards that includes the Toronto International Film Festival’s Tribute Awards and the Independent Spirit Awards, which recently announced gender-neutral acting categories for its 2023 edition.

It also follows a CSA bash earlier this year in which the star of CBC’s gender-fluid millennial TV dramedy “Sort Of” was notably absent from the acting nominees, despite the show snagging a leading 13 nominations.

“Sort Of” star and co-creator Bilal Baig and non-binary co-star Amanda Cordner chose not to submit their performance for consideration due to “disappointing” binary acting categories, executive producer Jennifer Kawaja confirmed earlier this year in an email to The Canadian Press.

“And I would say that we’re so excited for this upcoming year, though, to include more people,” he said.

The new non-gendered categories were met with mixed reaction by non-binary actor and writer Jo Vannicola, a founding chair of the LGBTQ committee in the actors’ union ACTRA Toronto who applauded the academy’s “good intent.”

However, Vannicola – who uses they and them pronouns – said they would rather see additional categories for various genres and different gender identities, fearing that without more specific categories nominees could skew white male.

“I think we’ve got to go the other direction — not reduce, just expand. More options, more opportunities, more categories,” said Vannicola, who played a non-binary character in “The Expanse” and a transgender character in “Slasher.”

“We live in a very oppressive, transphobic, homophobic world. And creating more opportunity is something we should embrace as an industry. If that means that a trans woman wants to submit for both woman and transgender, all the power to her, I feel like we should support that. Because it’s very hard to get work in an industry that has very few opportunities for queer, non binary, and transgender performers.”

Calabro said organizers will be watching for any imbalance and would consider corrections if needed, but noted the CSA digital media performance categories have been gender neutral since 2019 and he described them as “a fairly even field.”

Director and electronic music producer D.W. Waterson, who identifies as non-binary and gender-fluid and uses the pronouns they and them, welcomed the changes as “a very strong step forward for the Canadian Academy.”

“It just opens so many doors and opportunities and really lifts up performance above all else, rather than what gender you were assigned at birth, which really shouldn’t dictate how great of an actor or performance you can have,” said Waterson, part of the TIFF Filmmaker Lab at next month’s edition of the Toronto International Film Festival where they will work on developing their feature debut “Backspot.”

The CSA changes announced Thursday were among a swath of tweaks that also added a category for best original score in a feature length documentary, and split categories including the best sound, non-fiction race, which is now best sound in the documentary or factual genre and best sound in lifestyle, reality, or entertainment.

The changes bring the number of CSA categories to 148, up from the last edition’s 145.