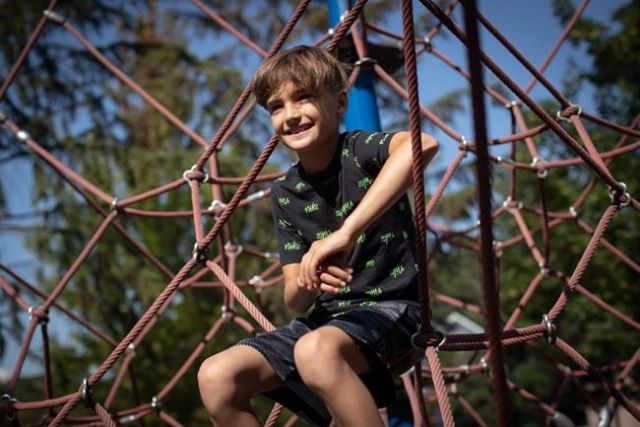 Toronto student Ari Blake, 11, poses for a photograph while on vacation in Vancouver, B.C., Tuesday, Aug. 24, 2021. With classes back in full swing last fall, some Canadian students say it seemed like they were finally settling into a school routine after nearly two years of intermittent learning interruptions. THE CANADIAN PRESS/Darryl Dyck

With classes back in full swing last fall, some Canadian students said it seemed like they were finally settling into a school routine after more than a year and a half of intermittent learning interruptions.

Some kids felt like they were getting into a groove of seeing their friends, classmates and teachers within the constraints of COVID-19 school codes mandating masking and social distancing.

But this sense of relative normalcy only lasted a few months before the wildfire spread of the Omicron variant of COVID-19 forced schools to revert to strict safety measures, and in some regions, temporarily shut down classrooms.

The Canadian Press is periodically checking in with students about how COVID-19 is shaping their school year. Here’s what they had to say about the latest round of disruptions.

When Tecumseh Hotomani returned to school earlier this month, it felt like the Grade 5 student was going back in time.

The Manitoba government announced it was introducing a phased-in approach when classes resumed Jan. 10 to allow schools to better prepare for in-person learning amid record-breaking COVID-19 cases and hospitalizations driven by the Omicron variant.

Much to the joy of some students, Tecumseh included, the province decided the shift to remote-learning would only last a week.

“I don’t like (online learning). I am fine with a week but not two months,” he said on his second day back at school.

Instead of regaling his friends and classmates with talk of what he got for Christmas, the sociable kid could only communicate with his friends over online chat, but the system had its limitations.

“We can’t really speak to each other during class in remote learning, because the teacher is going to be reading,” he said.

Tecumseh is excited to head back to school on Monday so he can play with his friends in gym class and expand his mind with science experiments.

His mother, Grace Redhead, was initially in favour of a switch to remote learning. However, her opinion changed when the province failed to implement additional restrictions to complement the move.

“If they shut down everything…that would make more sense to me but I really don’t think the remote learning the way it is now is benefiting anyone,” Redhead said.

Right before Omicron hit, Ari Blake said it looked like COVID-19 was loosening its grip on Grade 6.

His Toronto school eased its rules to allow him to eat at recess or play on the field with friends outside of his cohort without fear of being reprimanded.

In November, Health Canada authorized the first COVID-19 vaccine for children aged five to 11. When he got his shot, Ari said he “felt like there was a new me.”

But as the Omicron variant picked up steam, Ari noticed that more of his friends were getting sick with COVID-19. “At one point, I thought a million per cent, I’m going get it,” he said.

Before school let out for the holidays, Ari packed up his desk with the expectation that it may be a while before he returned.

He was right. On Jan. 5, Ari logged in for about a week and a half of virtual class.

“We’ve done it so much that I feel like I’ve kind of got control of it,” Ari said.

He’s excited to go back to class on Monday and play football with his friends at recess, but he suspects that probably won’t last.

After nearly two years of shifting back and forth between in-person and remote learning, Ari feels like he’s picked up on the rhythms of the COVID-19 school shuffle.

“I think we may go back online for like another two weeks in maybe May or March,” he predicted matter-of-factly. “Then we’re not going to go back online until summer.”

Abbasakoor said she feels like students have become “pawns” in a game between politicians and pundits that has left parents on their own to figure out how to best take care of their children.

When Kieran Mellon found out that Alberta was extending winter break by a week as the Omicron variant ripped through province, he did what any 17-year-old boy would do — slept a lot.

The Grade 12 student in Edmonton headed back to school last Monday to see that a number of his classmates were absent, presumably because they had COVID-19 symptoms or their parents were keeping them home to prevent them from catching the virus.

On Tuesday, Mellon showed up to one of his classes and found out that the student he’d sat beside the day before was out sick with COVID-19, but he wasn’t too worried about the exposure.

“I’ve been careful,” he said, noting that he was wearing a mask and is triple-vaccinated. “Hopefully I don’t get it.”

The Alberta government supplied students with medical masks when classes resumed, but by the end of Mellon’s first week back, he said he hadn’t received the rapid test kits the province had promised.

Mellon said any slack in the school’s safety rules has snapped back to rigid enforcement, and he doesn’t expect the indoor soccer team he joined at the end of last year will be lacing up any time soon.

Sports are just one of the high school hallmarks Mellon has missed out on since the pandemic hit in the middle of his Grade 10 year.

There have been no school dances, or bike-a-thon fundraisers, and he’s not holding his breath for a graduation bash.

“High school hasn’t been the best, anyways, because of COVID,” said Mellon, who’s been accepted to University of Alberta. “I kind of just get through it and move on.”