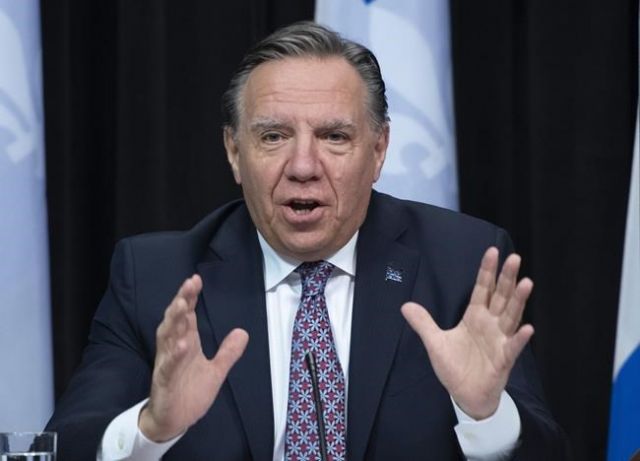 Premier François Legault speaks during a news conference Tuesday, Nov. 23, 2021, at the legislature in Quebec City. THE CANADIAN PRESS/Jacques Boissinot

Indigenous leaders in Quebec on Friday denounced Premier François Legault for his decision not to meet with them during a two-day economic summit in Montreal.

Ghislain Picard, chief of the Assembly of First Nations Quebec-Labrador, criticized Legault for speaking with reporters after the speech and for not meeting with Indigenous leadership.

“He did not have time to meet with the chiefs, but he did have time to speak to the media,” Picard said at the conference, called the Grand Economic Circle of Indigenous People and Quebec.

Picard said Legault was in “electoral mode,” adding that the premier’s refusal to meet in person with the chiefs “shows a certain level of arrogance.”

Indigenous leaders said Legault had only planned to deliver remarks to the gathering but then finally agreed to take three questions at the end of his speech from those in attendance.

Réal McKenzie, chief of the Innu Matimekush-Lac John of Schefferville, Que., asked Legault about royalties owed to Indigenous Peoples in exchange for the use of their lands. John Martin, chief of the Micmacs of Gesgapegiag, asked the premier about First Nations communities being excluded from accessing natural resources.

Neither chief said they were satisfied with the premier’s responses.

The two-day event, which concluded Friday, aimed to bring Indigenous and non-Indigenous business people together.

During his speech, Legault announced a $10-million investment over five years for First Nations Executive Education, a program based at HEC Montréal business school.