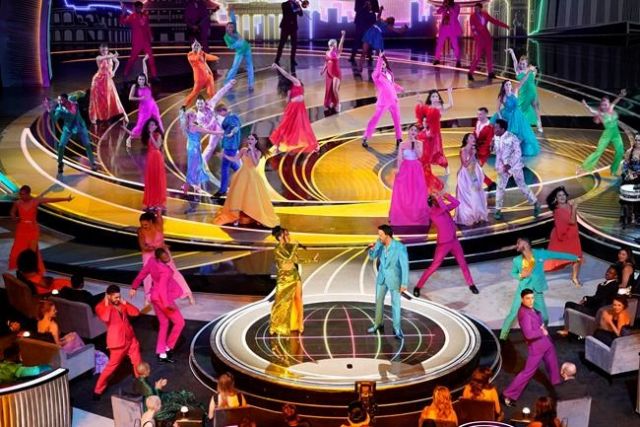 Becky G, center left, and Luis Fonsi, center right, perform “We Don’t Talk About Bruno” from “Encanto” at the Oscars on Sunday, March 27, 2022, at the Dolby Theatre in Los Angeles. (AP Photo/Chris Pizzello)

Television ratings for the Oscars rebounded somewhat from last year’s record low, but the event clearly doesn’t have the appeal to viewers that it once had.

“CODA” won best picture in Sunday’s ceremony, but all of the winners and losers were overshadowed by best actor winner Will Smith storming the stage to slap comic Chris Rock because of a joke Rock made about Smith’s wife, Jada Pinkett Smith.

Held in the midst of the COVID-19 pandemic, the 2021 ceremony had reached a startlingly low 9.85 million viewers. That led to several changes in the Oscars going into this year, including the addition of hosts and awarding eight categories ahead of the broadcast and editing them into the live show.

While that clearly seemed to help, an audience of 15 million is still below the 23.6 million people who watched the Oscars in 2020. Until last year, that was the smallest-ever audience for an Oscars ceremony.

Nielsen did not immediately have more specific viewership numbers for Sunday’s show, but the research company Samba TV said its own study did not indicate that the Smith-Rock incident had a significant affect on the audience size as the ceremony happened.

Viewership for live television events, with the notable exception of NFL football games, has been declining for several years with the advent of streaming and cord-cutting. Some Hollywood observers believe that the relatively niche appeal of many films honored by the Oscars has also limited the audience.