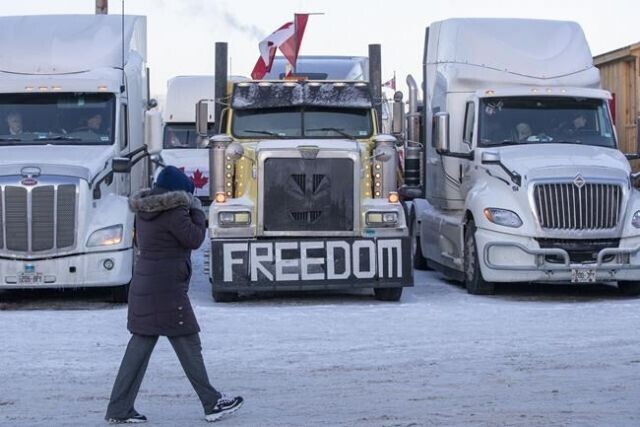 Tyson George Billings of High Prairie, Alta., will remain in an Ottawa jail while waiting to answer to charges concerning his role in the three-week protest that debilitated the core of the national capital.

Billings, 44, was arrested Feb. 19, on the second day of a large-scale police operation to disperse the protests that had created gridlock in downtown Ottawa.

Demonstrators, protesting the Liberal government and COVID-19 restrictions, blocked roads, drove slowly down Ottawa highways, and blasted the core with noise from truck horns for days on end.

Ontario Justice Donna Hackett issued a publication ban on the evidence and reasons for her ruling but said she was not satisfied that Billings should be released on bail.

Billings, nicknamed “Freedom George” by fellow demonstrators in Ottawa, livestreamed his participation in the protests over several days.

He sat in the courtroom wearing a black hoodie, the word “Freedom” printed on the chest, with his head in his hands at one point as Hackett delivered her decision.

He’s the latest key organizer for the freedom convoy protest to be denied bail.

Tamara Lich, who served as the public face of the convoy, was ordered to remain behind bars last week and have no contact with other main figures in the protest — Pat King, Benjamin Dichter, Christopher Barber and Daniel Bulford.

Lich’s lawyers plan to appeal her denial of bail at a hearing Wednesday.

King, a close associate of Billings, was denied bail on Friday, when Justice of the Peace Andrew Seymour said the evidence painted a portrait of an individual with clear intent to continue his protest.

King was also ordered not to communicate with fellow organizers, including Billings.

Barber was arrested and released on bail.

As of Feb. 21, Ottawa police had charged more than 120 people with a combined 393 offences in connection with the protests.

Meanwhile an Ontario court has extended to March 9 a freezing order on funds donated to the Ottawa protest, as a class-action civil suit against organizers continues.

Parties in the case have agreed to move some donated funds and cryptocurrency into escrow, which could be redistributed to affected Ottawa residents and business owners should the class action succeed.

Norman Groot, a lawyer representing some convoy protest leaders, says Christopher Garrah, Benjamin Dichter and Nicholas St. Louis have agreed in principle to moving donated funds within their control to an escrow account.

Groot notes the funds that Garrah, Dichter and St. Louis have agreed to move to escrow might not account for all the cryptocurrency that was donated, and he proposed parties meet next week to take stock of what has been transferred.

An escrow agent will oversee the transferred funds, and will be permitted to change the passwords for cryptocurrency.

The class-action lawsuit seeks a total of $306 million in damages related to the three-week anti-government convoy protest near Parliament Hill that snarled traffic, shut businesses and plagued residents with near-constant honking.

Joe Biden the Mail Order President, and How he DESTROYED Gas Prices