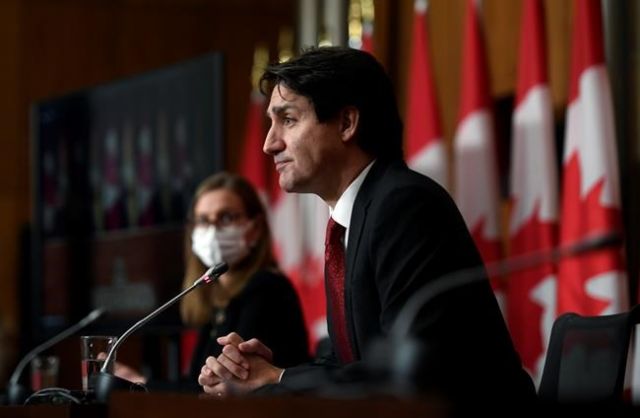 Prime Minister Justin Trudeau answers questions as and Minister of Families, Children and Social Development Karina Gould listens during an announcement on early learning and child care in New Brunswick, in Ottawa, on Monday, Dec. 13, 2021. THE CANADIAN PRESS/Justin Tang

Justin Trudeau’s minority Liberal government has easily survived its first confidence test of the new parliamentary session with the help of the Bloc Québécois and the NDP.

A Conservative amendment to last month’s throne speech was defeated by a vote of 215-117.

Had the amendment passed, it would have been considered a defeat of the government and could have triggered another election, less than three months after the last election handed Trudeau a second consecutive minority.

There was little suspense over Monday evening’s vote; Bloc Leader Yves-François Blanchet had signalled immediately after the throne speech that his party would support what he called “24 pages of completely empty words.”

The brief speech basically recapped the Liberals’ election promises for finishing the fight against COVID-19 and rebuilding a more resilient, greener and more inclusive economy.

While NDP Leader Jagmeet Singh has panned the throne speech, New Democrats could not support the proposed Conservative amendment, which criticized the government for failing “to adequately address critical issues that threaten the prosperity of Canadians.”

The Conservative amendment specified that those issues include inflation, a “stagnant” economy, a housing affordability crisis, an “acute” labour shortage and a “national unity crisis.”

The House of Commons must still decide whether to accept the throne speech as written, which will be another confidence vote.